Amazon Throws It's Hat Into the Set Top Box Arena 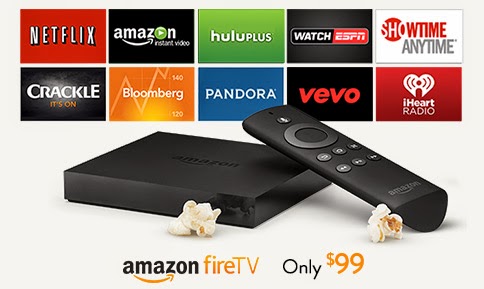 Amazon as expected today announced it's own set-top streaming box called Amazon #FireTV which is similar to other streaming boxes available on the market today such as the Apple TV or ROKU streaming boxes. Amazon FireTV is available today for $99, and allows consumers the ability to stream movies, music, videos, pictures, and has enough power to allow the playing of games (2Gb RAM, Quad Core Processor). This is the most power in a set-top box ever to come to market. Amazon will offer Amazon Prime Video streaming, On Demand movies, and HULU Plus at launch, but plans to offer other services like HBO Go, Showtime on Demand, ESPN, Netflix, and many other streaming services found on competing boxes. This FireTV is available now from Amazon for $99 shipped FREE. Amazon will roll out services and games throughout the year for purchase. The box comes with a standard remote, but a $40 Gaming controller will also be available that doubles as a remote. Nothing earth-shattering here, but Amazon has long been expected to throw it's hat in the set-top box arena to take it's place in the digital living room. Choice is good Kids. Apple is expected to update it's aging Apple TV unit and ROKU yesterday introduced it's Roku﻿ Streaming HDMI Stick for $50, an offering similar to Google's Chromecast.  Let the games begin!