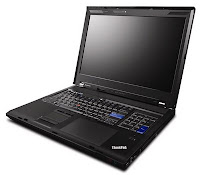 It seems like only yesterday that Lenovo took over the Thinkpad line from IBM. But in the few years since the Chinese computer giant bought the elite notebook computer line from Big Blue they've made great strides in keeping the Thinkpad line of professional laptop computers on the cutting edge while maintaining the signature black finish and solid performance reputation that IBM had always been famous for throughout its history. But Lenovo hasn't rested on its investment laurels since making that enormous cash outlay to buy the division.

After introducing the ground breaking X300 3lb. ultra-portable earlier this year, Lenovo signaled yesterday that it was going in the opposite direction by announcing its Desktop Workstation replacement line of W700 Thinkpads. The W700 line of Thinkpads features an unprecedented list of features and specification that have never been integrated into a laptop before now. With it's 17" 1920x1200 High Definition 400 Nit (brightness) screen, this is the first Thinkpad ever to sport a 17" screen. Weighing in at a hefty 8lbs depending on configuration, the W700 is not the heaviest laptop out there today, nor is it made for the typical road warrior, but it is indeed a transportable machine.

What sets the W700 apart is of course not only the Thinkpad moniker. Thats the good news. Lenovo added Intels recently announced Quad-Core Mobile Extreme Chips which means that the W700 can run native 64bit applications with processor speeds of up to 3.06Ghz operating on a 1024Mhz internal bus. With the ability to house up to three hard disk drives (two internally and one in substituted the ultra-bay sans the optical drive) this machine could conceivably hold up to 1.5Tb of data (WOW!) when using three 500Gb 2.5" drives available today from Hitatchi and Samsung. Raid 0 and Raid 1 are possible with two drives and is supported by Lenovo. Add an 'NVIDIA Quadro FX 3700M video card with 1GB dedicated video memory which is also an option. This marks the first time a laptop features a video card with that much memory. Dual-Link DVI is also a unique feature available on the W700, which gives the W700 ability to run larger LCD monitors (28-30") without the need to use external hardware or lowering the screen resolution to do so. In addition, the W700 has the industry standard Display Port, the next generation HD digital monitor connector. A Blu-Ray recordable drive is also an option available on some models. One unique feature that the W700 sports is the Integrated WACOM palm rest digitizer and pen for CAD/CAM, as well as for other digital manipulation/conversions and digital photography enhancements. Add Integrated color calibration for almost life-like image screen reproduction and you have the makings of a laptop never before seen in the marketplace. Just about every other option is integrated like 2Gb Turbo memory, 801.11n wireless, Bluetooth wireless, integrated Thinkcam, (7-in-1) digital media-card reader, 5 USB 2.0 ports, Trackpoint/Ultra-Nav Touchpad, Dual-Thinklights, fingerprint reader, and something very rare on a laptop computer, an Accountants dream-a full numeric keypad. The W700 comes pre-loaded with Windows Vista OS. 64Gb SSD (Solid-State Drive) is an option, but with prices and capacities still not in check, its not widely expected that many will opt for an SSD drive on this machine.

The W700 is expected to start shipping in September, with prices beginning at a $3,299 list price, with some models/configuration reaching almost $6k (Yikes!). But with the laundry list of features and options, whats not to like about the W700? The only bit of advice we can offer is that you make sure to book that bulk-head seat in First-Class if you plan to watch the soon to be released Blu-Ray version of "IronMan" while flying with this behemoth . And hey, don't forget the back brace!
Posted by H. Fawaz at 8/13/2008 10:07:00 AM