Ipad2 Sends The Competition Back To The Lab 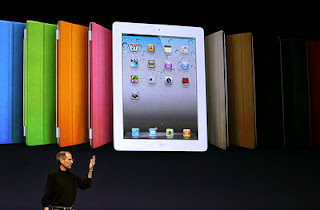 Apple has done it again kids! Putting out the thinnest most sought after tablet computer. Less than one year after introducing the world to TRUE tablet computing, the core of computing is once again sending the competition back to the drawing board with it's latest offering. Thinner, lighter, faster, sleeker, and more feature rich. This biggest difference between the first generation iPad and the iPad 2 are the disappointing quality dual cameras for taking both photos and videos, but also for video-conferencing or Face-Time calls between iPads, iPhones, and Macbook laptops that have webcams. Face-Time is Apple's no nonsense software that easily allows two face-time enabled iOS (iPhone Operating System) devices to connect & talk to one another. Other new options on the iPad2 is the fact you can get it in a White or Black Bezel, Choose 3G Models sporting radios from either AT&T or Verizon (original iPad was AT&T only) if you wish to have the option to connect to a cellular network on the go where this is no WiFi available. Both companies offer varying plans that are pretty much similar, so choose the company that has the best coverage in the areas where you will use the iPad2. You have a choice of 16GB, 32Gb or 64Gb capacity for $499, $599, or $699 respectively--Add $130 if you want the option to add 3G to your iPad. If you currently own an iPad there is no real compelling reason to upgrade from that unless you want the cameras or video-chat. Who really wants to hold up a 10" device to take a picture especially when most of us carry camera-phones with built in cameras that are much higher in quality than those Apple decided to use in the iPad2. Yes the iPad2 is noticeably faster given it's faster processor and speedier graphics chip, and it is slightly lighter and thinner, but these are not reasons to dump your old in favor of the new-wait for the iPad3 where significant changes will come to the display (some say retina high-density displays) that will be worth the wait and upgrade cost. Although the price of the iPad2 is in line with the original iPad, most retailers have followed Apple's lead in cutting the price of the original iPad by $100 while supplies last, so if you don't need the cameras, you'd do well enough to buy & save on that. What does the future hold? iPad3 of course, but don't look for it for at least a year--why would Apple rush to update something it already can't keep on the shelves of retailers, especially when there is a 2-3 week wait to get one!
Posted by H. Fawaz at 5/18/2011 12:17:00 PM