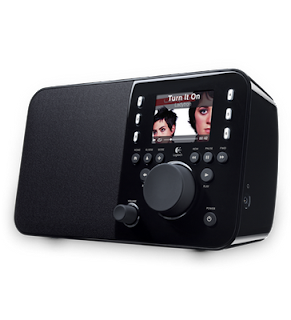 Many of my readers know that I'm an avid audio and music buff who embraces the various technologies that allow for a more diverse mix and ability to stream music in various forms to different platforms wherever I may be. An early adapter one might say of anything tech that gives me the ability to take my music anywhere. Logitech has long been in the computer keyboard and mouse game, and recently bought a small company called Squeezebox. Squeezebox is a basically a system that allows you to stream the music from your computer to play anywhere you like in your home.

Enter Squeezebox Radio (SR), a new and quite impressive little box that can from Logitech. With it's very intuitive interface and vivid 2.4" color screen, you have to love this clock-radioesque mini boom-box. Once you've connected this little marvel to your home 802.11x wireless network or hard-wired ethernet install a small piece of server software you must download to the PC or Mac that holds your music collection, you're ready to rock & roll--literally. The SR then finds the computer running the SR serer and streams your music by your choice of playlist, artist, album, genre, song or entire library. But that is only the beginning of SR's capabilities.

Logitech spent a lot of time refining this product, and I have to admit, they did their homework. If you're a subscriber to Rhapsody, Slacker Radio, Napster, Pandora, or even Sirius Satellite Radio, your SR is capable of streaming those music subscription services to you without the need for a PC or other hardware. Simply enter your credentials once and you're good to go for future needs. With six preset buttons, you can designate each button to a certain playlist, certain channels from Sirius, or any one of the thousands of online internet Radio stations available in just about every language and genre with one-touch. SR can play songs or music that has been converted to MP3, FLAC, WMA, WMA Lossless, AAC, Apple Lossless, WAV, and AIFF, which just about covers most libraries. These are the most common CD ripping formats. Of course it cannot play any songs you bought on iTunes that are still have DRM. (Digital Right Management-the copy protection that every iTunes download had before this Summer) You now have the ability to strip that copy protection thru iTunes by paying Apple a few pennies per song. That money pretty much goes to the record companies.

The SR interface is pretty straight forward, although entering ID's and passwords for the various subscription services can be a bit tedious given that you have to turn a single large knob to pick and choose each character that needs to be entered (no keyboard) but fortunately you only have to do this once for each service you wish to use. The SR also features a pretty nice digital clock and acts as an alarm clock that you can be programmed to wake you up with up to six different preset alarms each waking you up to six different stations or playlists. The automatic screen dimming feature works well and makes this unit the perfect bedside companion which is where I have been using this unit since I got my hands on it almost a month ago. The sound and fidelity from this little box is pretty good even at higher volumes, but don't expect audiophile quality playback. Even though the SR does not have an iPod dock (why would you need to plug in your iPod if you have access to your entire iTunes library) the SR does have an audio input if you choose to tether your iPod when you'd rather do so.

Overall, I'm impressed with this product. It does what it is supposed to do and it does it well. If you are looking for a great holiday gift for that music buff on your list, this is it. Street price on this unit is already down a cool $50 since it started shipping in October, going for about $150 today--somewhat steep for the average budget. However if you want something that is pretty practical and functional, there isn't anything else out there that comes close in features. An optional remote and battery are available for portable use for another $49 something I think Logitech should have included in the package to begin with. The SR comes in two colors-piano black or fire-engine red. For most, the music is what this is all about, but this little marvel also lets you view your Facebook status updates as well as those of your friends, and even lets you share/post your music tastes with them. That feature alone is worth the price of admission if you're an avid Facebook junkie!
Posted by H. Fawaz at 11/15/2009 06:48:00 PM